With the sad closing of Blount Street institution Tir Na Nog, the festival was down to only 10 venues this year, and it definitely felt smaller. This was the first year I’ve had trouble getting into more than one show I wanted to see because the lines were too long. Memorial Auditorium, last seen in 2013, rejoined the roster, and the black-box Kennedy Theater (also in the Duke Energy Center complex) was dropped; Busy Bee Cafe’s upstairs bar The Hive is now Mash & Lauter, and was no longer a Hopscotch venue; and Nash Hall, another new room and as it turns out the site of one of the best shows I saw this year, was added.

This year for the first time, they also had two headline stages (only on Friday): Gary Clark Jr. and Erykah Badu played at the Red Hat Amphitheater while The Dead Tongues, Anderson .paak and the Free Nationals, and Beach House played at City Plaza. I had planned to catch Clark, go back to City Plaza for .paak, then return to Red Hat for Badu, but due to a delay leaving Dallas, she didn’t arrive and start her set until something like an hour and a half late. I had a lot of other shows I wanted to see, so I didn’t wait around.

I also wasn’t able to get into Slim’s to see A Giant Dog on Thursday, or Sarah Shook & the Disarmers on Saturday, which was disappointing.

I hope that next year Hopscotch will be able to bring more venues (back?) into the fold, as having this few felt weird.

I saw Wye Oak my first time at Hopscotch, back in 2012, when they played in the final time slot, Saturday at half past midnight, at the Lincoln. I had only recently started getting into their music, but I got up close to the stage (unfortunately, the photos I took that year are lost to the mists of yfrog). They were transcendent, a huge highlight of the year, so I was thrilled to see them graduate to the main stage. The newer music from Shriek and Tween blends remarkably well with material from Civilian, The Knot, and If Children, in a live setting — Wasner and Stack’s multi-instrument virtuosity really shines.

That felt like a really special moment, to have seen them five years apart in such different settings at the same festival; but I don’t want my particular mention of Wye Oak to sound as though I’m dismissing the other bands. It was a very strong festival, as usual, and I can’t wait for next year.

Two weekends ago now, I went down to Raleigh, NC again, for the Hopscotch Music Festival — the sixth year of the festival, and my fourth year going (my previous Hopscotch posts are tagged hopscotch).

No one else came down with me this year, and Aggie didn’t attend most of the festival, because Speakers In Code wasn’t covering it this year. But she and her boyfriend came into town for the Saturday day parties, and she ended up getting hold of a photo pass so she was able to shoot the main stage acts that night. Check out her post over at her blog.

New Belgium was replaced as the beer sponsor on the main plaza this year by Stella Artois and Goose Island — which is to say, by Anheuser-Busch-InBev. That’s a shame, both because New Belgium is an independent, employee-owned craft brewer while AB-InBev is a massive multinational conglomerate, and because though Goose Island’s brews are fine, New Belgium’s are just better.

That aside, however, downtown Raleigh’s food and drink options are as excellent as always, and I hit the key highlights as usual: brunches at the Times and Joule, dinners at the Busy Bee and Beasley’s, the city plaza gyro shack, the late-night pizza truck.

I saw 31 bands this year, down from 38 last year, but that was an intense time, and a record I don’t feel a pressing need to try to break. Coming up this weekend is the smaller Boston Calling festival, whose September installment is a different weekend than Hopscotch for the first time this year.

I delayed too long in writing this recap and my memories of the shows I saw aren’t as clear as the past couple years, so I’m just going to bullet-point most of the bands I saw (especially at day parties) instead of discussing them. Bands I’ve seen before are italicized, bands I’ve seen before at Hopsctoch are also bolded.

Hopscotch felt a little smaller and a little quieter this year, and I’m still a bit sad that New Belgium was replaced by AB-InBev (and not a huge fan of the e-cigarette vendor booth on the main stage, for that matter), but it was a great time as always, and as always I can’t wait to go back next year. One big plus this year was unrelated to Hopscotch itself: Boston Calling, which puts on one festival in May and one in September, put its fall date two weeks after Hopscotch, instead of on the same weekend like they did the last two years. I’m very glad to be able to go to both this time, especially since Minneapolis hip hop collective Doomtree, one of my all-time favorite groups, will be at Boston Calling. 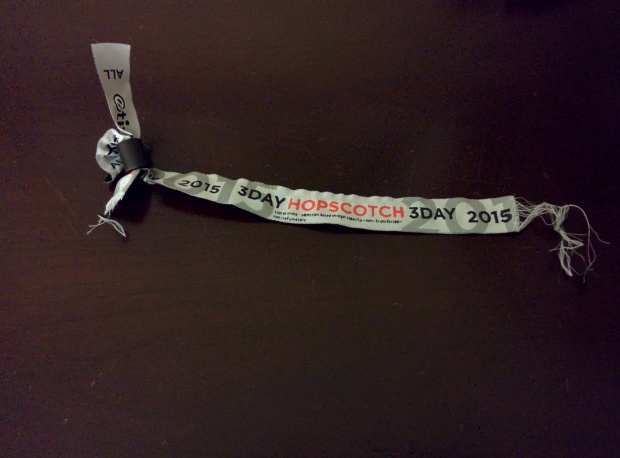 Last year I wrote a wrap-up post about the Hopscotch music festival in Raleigh, NC, so this year I’ll do the same; but I’ll skip the prefatory material. My final tally for this year: 38 bands. This was Hopscotch’s 5th year, and my 3rd year coming to Hopscotch.

Joel didn’t come this year, but some other friends, Seth and Chris, did; they stayed with a friend nearby, while Aggie split the hotel room with me so she wouldn’t have to drive back to her house in Chapel Hill every night.

We ate the requisite dinner at Beasley’s, and Aggie and I ate “breakfast” around 11:30 or noon at the Raleigh Times all three days. I was happy to see the little Greek place on the city plaza was still there, for fast, cheap, delicious gyros without having to leave the main stage show; and New Belgium was still the primary beer sponsor, with $5 draughts and $4 cans on the plaza — prices that would be unheard of even at a regular bar in Boston, let alone a limited-access concert venue like this.

I managed to marshal my now rather old phone’s battery life well enough to get at least one photo of every main stage and nighttime club show I saw, though most are not great shots. (For excellent photographs of Hopscotch, try Aggie’s preview post and her Flickr photostream.)

Hopscotch remains my favorite three days of the entire year. Raleigh at the beginning of September is still hot and humid, but it’s bearable, and has such a wealth of excellent food and drink that even without the festival it would be a fun place to spend a weekend. With 150+ bands to see — and a dozen or more choices across all genres at any given time between noon and 1AM, all within at most ten minutes’ walk — it’s an experience to which nothing compares.

I don’t think I wrote about it here, but last year I went to the Hopscotch Music Festival in downtown Raleigh, NC (my first time in that city, and in the South at all, actually). I hadn’t really heard of Hopscotch before I learned John Darnielle of the Mountain Goats would be playing a solo set, including a batch of one-time-only, acoustic, no-recordings-please, you’re-here-or-you’re-not piano covers of heavy metal songs. As one might imagine, that spiked my interest meter, so I did some more looking, and discovered a massive, three-day festival with an immensely diverse lineup — and several acts aside from Darnielle that I wanted to see live, including a late-night Wye Oak set and The Roots headlining. My college friend Aggie lives, works, and takes photos at rock shows down in the Triangle, so with the promise of seeing her again for the first time in years, and having her expert guidance around the local bands playing the free day parties, my decision was made.

(The promise of Darnielle’s set and the range of great other stuff also convinced my friend Melanie (@grammar_girl) to come down — but she was hit by a car and broke her hip in August, and although she’s now recovered just fine, she was in no shape to hike all over downtown Raleigh in September.)

I went down thinking it would be a one-time fun fling for me (after all, I’m not so young anymore), to see an unusually great lineup of bands I love and reconnect with an old friend. But, as anyone who knows me in person and/or follows me on twitter will probably recall re: my absolute inability to shut up about it already, I was basically camping their website for the ticket announcement from the day I got home. I got in on the early-bird sale for Hopscotch 2013, booked my flight and hotel shortly after, and convinced my friend Joel (who I’d talked into some concerts here in Boston, with reasonable success) to come along this year — and be extra careful when crossing the street until we’d gotten back.

This year was to feature Big Boi as a headliner, but he canceled a few weeks ago, and was replaced by Holy Ghost! and A-Trak on Friday night; Saturday, Spiritualized headlined. I actually skipped both headline slots this year (though I did see a couple of the City Plaza shows — Gross Ghost in the first spot on Friday, and Lollipops and the Breeders on Saturday).

Hopscotch is a great festival, both for seeing acts you already love, and for wandering around to see what sounds interesting, and discovering bands you’d never heard of; not to mention the amazing restaurants (chicken and waffles at Beasley’s is a must, Raleigh Times and the Busy Bee are great as well, and the Mecca is the Platonic ideal of a greasy spoon) and regional craft beers.

This year was every bit as great as 2012 was, and I can’t wait to see what next year brings (still crossing my fingers for Dessa, POS, or others — or better yet, all! — of the powerhouse Minneapolis hip hop collective Doomtree; Neko Case and Kelly Hogan; or Kendrick Lamar and Okkervil River, who played Boston Calling this past weekend instead. Just in case anyone from the Hopscotch organization is reading this!).

Shows I saw this year (probably leaving out some acts from the day parties, though):

To lift up one thing, lift up the adjoining.

Something there is that doesn't love a wall,
That wants it down

[N]either the term Orient nor the concept of the West has any ontological stability; each is made up of human effort, partly affirmation, partly identification of the Other.

Beer is proof God loves us, and wants us to be happy

Because the world is not a floating sequence of unfortunate events; it's an edifice with foundations, load-bearing walls, plumbing, wiring, ductwork; and in order to renovate, you need to study those structures.